Cannabis is a potent vasodilator: almost immediately after it enters the body, it opens up blood vessels to increase their diameters, which in turn lowers blood pressure. This is where the concept of “medical marijuana” comes in; for those with high blood pressure, perhaps the drug can help with complications they may be experiencing. Aside from its effect on blood pressure, however, cannabis can also increase heart rate by up to two times for up to three hours after its use. Though this heart rate increase decreases in magnitude with increased tolerance to the drug, the pounding heart sensation puts all users at a greater risk of having a heart attack during the duration of their use. The risk of having a heart attack is about five times greater in the first hour after smoking marijuana. This risk is higher and even more serious in users with coronary heart disease, and patients who had already experienced a heart attack and continued to use marijuana at least once a week saw triple the rate of cardiovascular mortality. Marijuana smoking also provokes angina in patients that already have heart disease [5, 11]. 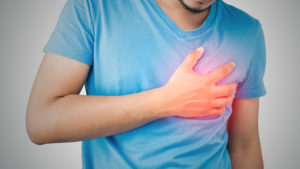 Researchers are still debating whether the effects of marijuana on the heart are beneficial or harmful. Those that are more optimistic look to the success stories of medical marijuana. Though no research shows the existence of any long-term, concrete benefits of cannabis on the heart, there are some examples of its use in curative therapy. For example, recently non-psychoactive cannabidiol has been explored as a potential remedy for heart failure, as this form of the drug has been successfully tested on rodents in reducing vascular tension or blood vessel strain. The same rodent study showed that cannabidiol protects the arteries from damage caused by sugar. It is important to note that this is not the same drug recreational users would smoke or ingest. People who use marijuana frequently use the psychoactive form of the drug, which contains THC. Also, many of the success stories discussed by these recent studies have only been seen and tested on rodents. To truly determine whether the use of cannabidiol on patients is reasonable or not, a considerable amount of human trials would need to be performed; however, this of course brings a question of ethics to the table.

On the other hand, there are many others who believe-- and much researching supporting the idea-- that using cannabis puts people at a higher risk for developing heart conditions. The American Heart Association published research done by a team from St. Luke’s University Hospital Network in 2016 that concluded that males that use marijuana are at a higher risk of developing stress cardiomyopathy-- a temporary weakening of the heart muscles-- than non-user males. By analyzing hospital data from 33,343 patients with the condition, they found that only 1% of these patients were cannabis users and that most of this 1% were younger males, while the majority of sufferers of this condition are older women experiencing stress or grief. Lastly, it was found that the standard risk factors leading to stress cardiomyopathy were absent in these young males, leading the researchers to conclude the high possibility that cannabis use is its own risk factor [5]. Furthermore, another study done by a team led by cardiologist Dr. Aditi Kalla found increased risks of heart failure and strokes correlated with patients that admitted to marijuana use. The group gathered information on 20 million patients from hospitals all over the US who had been discharged between 2009 and 2010 and analyzed the records to compare the occurrence of strokes and other heart complications in those who claimed they used the drug versus those that did not. Through the group of only 1.5% of these patients that admitted they were marijuana users, the risk of strokes was found to be 26% greater and that of heart failure was found to be 10% greater than those in the opposing group-- those patients who claimed to be free of this drug use. The rates of these complications remained higher in the former group even when known risk factors for strokes and heart failure were corrected for. The team did find this correlation significant, and Dr. Kalla believes that the results found here help to reinforce as well as substantiate the idea that marijuana smoking does indeed pose some serious threats for overall heart health. It is important to note, however, that this study gives a third-person perspective in the sense that the researchers were only able to view the hospital patients and could not formally interview them to gain insight into their habits when using marijuana [10].

Overall, marijuana’s link to heart conditions is a fairly new field of research, growing in popularity as routine use of the drug also becomes more prevalent. Though much research has recently began on the topic, much of the existing research is relatively hands-off and limited in that it frequently includes observation and analysis of existing groups of patients or hospital records but does not seem to involve the experimental stage of research that involves manipulation of variables or interviews or surveys with those involved. Thus, though there are many more questions for researchers to answer, those that have already taken the venture to learn more about this field have uncovered a solid foundation: there is much evidence that points to the fact that marijuana smoking certainly alters one’s heart, most likely putting it at risk of developing dangerous and potentially life-threatening conditions.