The chemicals in tobacco smoke have an effect on all parts of the pulmonary system-- the heart, the blood vessels, and even the blood cells themselves. The greatest impact seen on the blood vessels is the greatly increased risk for atherosclerosis, the buildup of plaque on the interior arterial walls. This originally waxy substance composed of blood cholesterol, fat, and other substances becomes hard over time, decreasing the diameter of the arteries and restricting blood flow out of the heart. This means that bodily organs get less oxygen-rich blood, which leads to other health complications such as peripheral artery disease (PAD). If plaque buildup and vessel hardening is seen in the coronary arteries-- the arteries that supply blood to heart muscle-- this is known as coronary heart disease (CHD), which is commonly known as just “heart disease.” 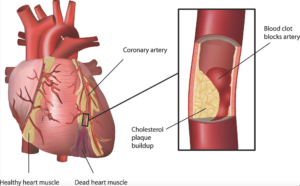 This is also caused by the thickening of blood that occurs in cigarette users, which can cause clots to form in blood vessels, which can eventually lead to blockages in the vessels. Over time, this condition can cause heart attacks, arrhythmias, strokes, and even death. Heart disease also raises blood pressure and increases heart rate. CHD is the #1 killer of both men and women in the United States, and 30% of deaths caused by heart disease are found to be caused by cigarette smoking. 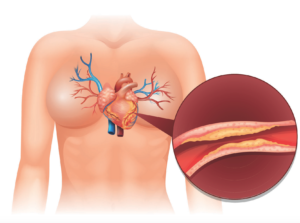 Cigarette users as well as those constantly around secondhand smoke also see a significant increase in risk of having a stroke-- a loss of brain function when blood flow within the brain gets disrupted-- due to the increase in blood pressure caused by smoking or inhaling cigarette smoke. For nonsmokers who are frequently around secondhand smoke, stroke risk increases by 20-30%. The risk is even greater for smokers, with the greatest risk for strokes and heart attacks being found in women or diabetics who smoke [12]. 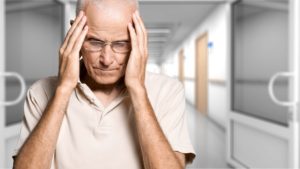 Moreover, smoking is the #1 preventable cause of peripheral artery disease, which occurs when blockages or atherosclerosis occur in the peripheral arteries-- those blood vessels carrying oxygenated blood from the left ventricle of the heart to the other parts of the body, such as the arms and hands or legs and feet. With narrower vessels, blood flow gets reduced, which in turn reduces the amount of oxygen received by these parts of the body. The cells and tissues may begin to deteriorate and die if not cured, and in extreme cases amputations may be necessary.

Lastly, smoking has dangerous effects on the aorta, the major artery pumping oxygen-rich blood from the left side of the heart to the rest of the body. Specifically, the part of this vessel that gets most severely affected is the part that lies in the abdomen-- known as the abdominal aorta. The narrowing and damage that is seen in this vessel as a result of smoking can lead to an aneurysm-- a bulged and/or weak area of the arterial wall-- that could potentially burst or rupture. If this occurs, it can be potentially fatal. It has been found that nearly all deaths caused by this are traced back to cigarette smoking in the patient. Women are at a higher risk for abdominal aortic aneurysm bursts than men are [13]. 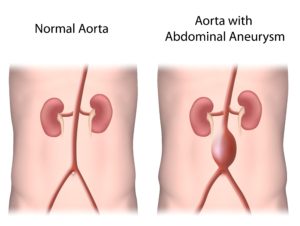