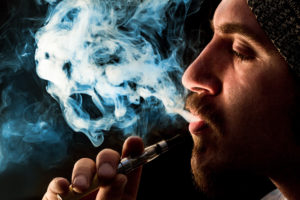 E-cigarettes, also commonly referred to as vape pens or hookah pens, are a relatively new form of nicotine delivery that have been growing in popularity in recent years, especially among the youth of America. In fact, for US teens, e-cigarettes are the #1 used form of tobacco, partly due to the common yet false belief that they are safer and healthier than regular cigarettes. In fact, it was estimated that over 3 million teens in the US used e-cigarettes in 2015-- about 10 times larger than the number of teens that had used these just four years prior. The US surgeon general referred to this as a “public health crisis.” The percentage of American adults that have participated in the vaping trend has also increased by over 5% since 2010, with about 8.5% of adults in the US regularly using e-cigarettes in 2017 [18]. E-cigarettes are battery operated and usually release aerosol containing nicotine, flavoring, and other chemicals for users to smoke.

Research has shown that e-cigarette use is often a gateway that leads people into trying and using other tobacco products. One study in particular found that young teens who began e-cigarette use before they began high school were more likely than others to begin smoking cigarettes within the following year. Also, the nicotine and vapors affect the brain’s hormones and reward system which can potentially lead to addiction-like behaviors and symptoms or set up the brain for quicker and more severe addiction to even more dangerous drugs-- such as cocaine and methamphetamine-- upon use. E-cigarettes and their vapors also contain known carcinogens and toxins.

Aside from the dangerous and addictive effects that the nicotine in the e-cigarettes cause, “vaping” has been generally found to also cause brain, heart and lung damage; the formation of malignant tumors and cancer; complications for pregnant woman, such as premature births or stillborns; and problems in brain and lung development in young users.

It is also important to note that there is no concrete evidence that points to the validity of or proves that the use of e-cigarettes can be a helpful tool for cigarette smokers who are trying to quit the habit. Many smokers may begin to use e-cigarettes due to the belief that they are a safer alternative to cigarettes and can help ease their path to quitting; however, e-cigarettes have been found to be addictive as well and research does not show that they are a reliable method for smoking cessation. There are many other medically approved methods, such as medication, nicotine replacement therapy (i.e. nicotine patches or gum), behavior therapy, or some combination of the three [14, 15].